Some call it empowering; others say it’s offensive. Some just don’t get it.

“It feels fun, exciting and maybe a little risky to be naked in nature,” said Kari Armstrong, co-organizer of The Boulder Hiker Chicks, a women’s hiking club. “When you have worked hard for your hike, or even if you haven’t, it is fun to do something a little silly and liberating to celebrate.”

No one is sure exactly how the trend of removing your top on the summit of a mountain and getting a photo taken of your bare back to share on social media started, but this summer the trend seems to be exploding among female hikers in Colorado.

Armstrong and her co-organizer, Alli Fronzaglia, agree that they were inspired by a now-defunct women’s hiking group’s social media account back in 2015.

When they started their hiking group, Armstrong and Fronzaglia reveled in a growing reputation for being a little wild, Fronzaglia explained, noting that they would sometimes wear costumes while hiking.

“Women joined us to let loose, gain confidence, and make new friends,” she said. “We had begun showcasing our shenanigans on social media. It was part of the fun.” So when they spotted other women hiking groups online baring their naked backs, some with arms raised in glory, it seemed natural to try it, too.

The whole experience seems to have two parts: First, getting and being half-naked on a trail that might have lots of other hikers on it while you have a friend snap the photo of the gorgeous mountaintop view and your naked back. Next, sharing the image on social media, either in a private group or on your individual Instagram or Facebook account.

Along with the images are captions that run from goofy to deeply personal as women share recovery from cancer and other serious health ailments, relationship heartache, body acceptance and other issues, in part to say how doing this helped them feel better.

“This was a big, important moment for me,” said Kelli Schulte, 36, a grants specialist, of choosing to do her own “bareback” photo on top of Torreys Peak, a 14,000-foot mountain. Schulte said she had just ended a relationship that had damaged her self-confidence. “With every step, I felt empowered. Like I was taking control of my life. Like I could and would be me again. I looked at my friend and said, ‘I’m taking one of those topless pics and I’m never giving up the things I love again.’ Then I snapped a couple of pics and I absolutely love them.”

In fact, she had her picture framed to hang in her bathroom as a daily reminder of the moment.

“From this point forward, I’m committed to living an authentic life,” the single mom and marathon runner said. “A happy and adventure-filled life.”

The practicalities of whipping off a jacket, a shirt and a sports bra after a grueling hike and maybe on a windy peak might also be a consideration for some women, but many like Schulte said it all happened quickly enough that they felt comfortable. “I rushed a bit to get my top off, just in case someone came up, but I did have someone to toss me a shirt. And I don’t care if someone sees my bare back,” she said.

Coral Scherma, a 58-year old academic adviser, had seen other women’s topless photos online and thought, “Cool for them, but I wouldn’t do it.” That is, until she was on a hike with her daughter-in-law, Donalyn White, 28, on empty Kenosha Pass one gorgeous day.

“I turned to her and said, ‘You know, I’m almost tempted to do one of those topless photos,’ ” Scherma recalled.

White was having the same thought at the same time. “It felt empowering to have her bring it up,” she said. “We each got one photo solo, and then Coral suggested taking one together, which was brilliant.”

There were a few seconds of nerves, White said, then no hesitation to be briefly topless. “It’s freeing and exhilarating,” she said. “Men are out there hiking with their shirts off all the time.”

After Scherma’s husband died a couple of years ago, she started hiking “as therapy.” “I’ve found more solace in the mountains than anywhere else, and I’ve discovered that I am much stronger — physically and emotionally — than I thought I was,” she said.

Scherma was equally pleased with the photo of the two of them together. “That is my favorite by far,” she said. “Two strong, intelligent, fierce women standing on the edge of the world.”

In case you’re wondering, it is legal for both men and women to be topless in the state of Colorado, with some restrictions for both.

“Honestly, it’s so easy and not really a big deal,” Scherma said. “Our culture is so incredibly neurotic about women’s bodies, and breasts in particular. Just go for it. Find an empty stretch along your way. You might surprise yourself.”

However, it’s not for everyone. Comments for these photos when shared on social media aren’t always supportive or along the lines of, “You go, girl!” Some will simply say, “It’s not sexual or tasteless, just not for me!” or, “I don’t get it.” Others can be harsh, stating they will “report” the image to the social media platform for indecency.

To be clear, no one is requiring that such photos happen in hiking groups, and it’s an individual choice.

“I think it’s just one more way for women to unapologetically claim their space on the trails and in nature,” Fronzaglia said. “So many of us, as women, spend our lives trying to do the right thing, trying to look a certain way, trying not to offend, trying to just be acceptable to society. Being in nature reminds us that, like the wildflowers and the trees, we’re perfect just as we are.”

Subscribe to our weekly newsletter, The Adventurist, to get outdoors news sent straight to your inbox. 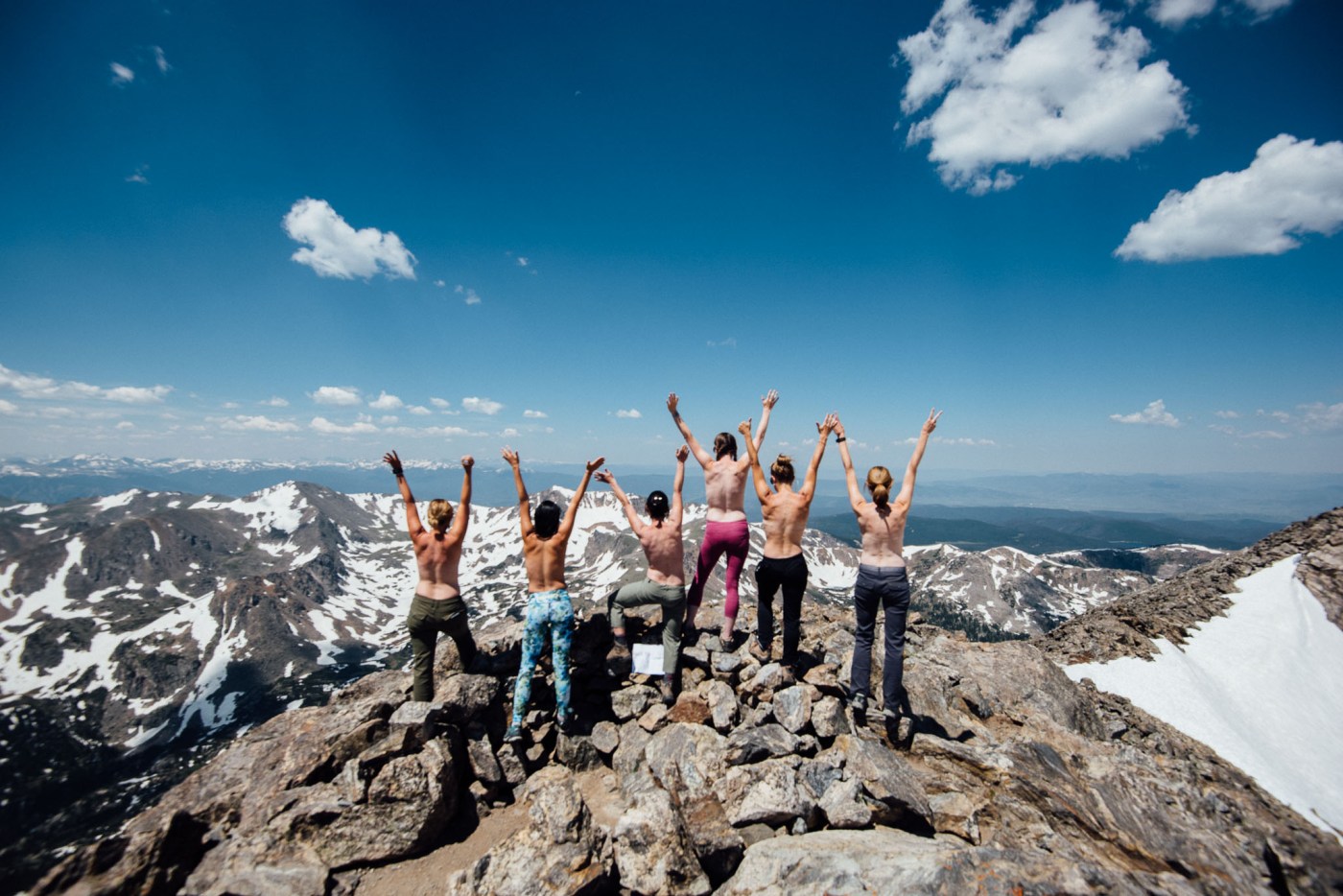