Why Isn’t It “The Toughest Job in the World” When a Man Does It? 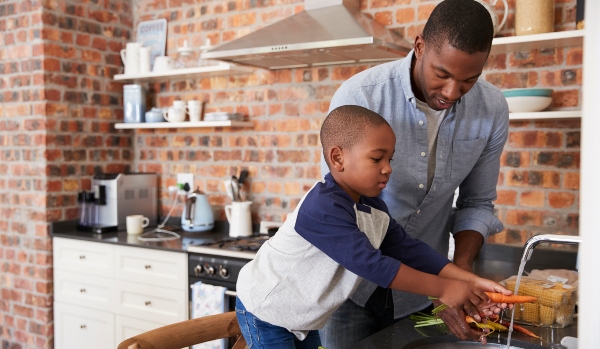 It took years to stop being embarrassed about being a stay-at-home dad. The difference between how people react to learning that and their reactions to the same detail about my ex-wife goes a long way in explaining why. When I was the sole breadwinner for most of our twenty-year marriage, the common response to hearing she was a homemaker was, “Phew, the toughest job in the world.”

I was a commercial trial lawyer at the time, the most stressful subset of one of the most literally stressful jobs there is, as were most of the people making that comment. Sixty to eighty-hour weeks were the norm with many of us, myself included, using substance abuse as a crutch to manage the pressures of billable hours, client demands, high stakes, and, once you were lucky enough to make partner and climb up the hierarchy, every headache that goes along with running a business. It wasn’t until I left that job that I realized how condescending this comment was. There’s an inherent joke to the whole tone of it — a nudge-nudge, wink-wink that I was doing well in my role as a man and provider and she doing well in hers as a woman and nurturer.

I’ve been living and raising kids with my current partner/fiancé for the past six years and I’ve been a stay-at-home parent almost all of it. Never, as in not once, has anyone responded to my role in our household with that refrain. That’s not bothersome in itself, since being a homemaker is categorically not the toughest job in the world. In the smattering of summer and full-time jobs I’ve had — ranging from carrying hod for a brick mason in the middle of summer to years as a commercial trial lawyer to fast food gigs and making cold calls from a telemarketing boiler-room — it’s probably the least “tough” job I’ve ever had. The thing that makes it bothersome is that the extreme reactions on either side are driven entirely by my sex.

Or, more to the point, hers. I suspect, if I were in a committed relationship with another man and our work roles were exactly the same, people’s reactions would be different.

One of my fiancé’s colleagues recently commented over a glass of wine that she “couldn’t put up with” a husband not working full-time to financially contribute to the family. When my fiancé asked if she’d say the same thing if the person she was talking to were a man, her colleague blanched at her own implicit sexism. Days later, she pulled my fiancé aside at work to admit that question made her rethink our situation because, were my fiancé a man, it never would have occurred to her to make that comment.

The assumptions underlying the belief I don’t belong in the home because I’m male are blatantly disrespectful to my fiancé. That belief assumes she’s not handling her money responsibly, that her career isn’t sufficient to provide the financial resources for our family, that her job doesn’t require some significant outside support, which is no small part of my job, and that she doesn’t understand me or our relationship enough to know whether she’s being taken advantage of as opposed to supported by me in that role.

The hard numbers on the subject both drive and reflect societies’ expectations when it comes to moms and dads choosing to stay at home. According to Pew Research, twenty-seven percent of moms stay at home while only seven percent of dads do so. More tellingly, in a different Pew Study, researchers found that nearly eighty percent of stay-at-home moms did so primarily to care for the children and household, as opposed to because of illness or joblessness or other outside causes. Less than a quarter of men surveyed said they were doing so by choice, meaning less than two percent of fathers are stay-at-home parents by choice.

As her coworker’s comment reflected, the silent and not-so-silent judgments people make about how our family divides the workload are leveled at least as much at my fiancé as me. It’s fine if she wants to earn some money, too, but she’s the one who should have spent three hours with her daughter at junior high registration yesterday before making dinner for the family and vacuuming up the dog hair, all of which I did between bursts of writing and none of which she even had to think about while she was at work.

The cringeworthy (and particularly American) question: “So, what do you ‘do’?”

For years after becoming a stay-at-home dad, I would respond to people asking, “What do you do?” by saying, “I do some contract work for a couple of law firms,” and/or “I’m a writer,” both of which are true in a literal sense. The broader truth, though, is that between running kids around, cooking, laundry, cleaning, gardening, helping with homework, doing dishes, and the myriad other tasks involved in caring for a family of four, homemaker is my primary job. It’s not only my primary job in terms of hours spent, but also my primary focus — more so through COVID when online school meant dealing with one or both kids in the house through the entire school day.

The truth is, in terms of what I “do,” I’m a homemaker. In the course of writing this article so far, I’ve also made and eaten lunch with our daughters, emptied the dishwasher, cleaned the kitchen, and done two loads of laundry. My fiancé woke this morning knowing today’s breakfast and lunch would be made and waiting for her in the refrigerator and the only household chore she needs to worry about when she gets home tonight is putting away her clothes, which I washed, dried, folded, and put on our bed.

The financial reality of staying at home

There are subtle and not-so-subtle benefits for our entire family resulting from how we’ve chosen to divide our workload. Financially, she’s commented more than once that she’s currently less stressed about money — and has more of it — than in any prior relationship, all of which involved both people working full time. On the surface, that may be surprising. In terms of hard numbers, it’s not.

We have no childcare expenses, and the constant availability of childcare is one of the reasons she was able to add a master’s degree required for her current position with relatively little hassle. I love to cook, bake, and tend a moderately large garden, making our grocery bill a fraction of what it was when her schedule meant largely relying on processed and premade foods. Paying twenty-seven cents per pound of bulk flour instead of buying three-dollar loaves of bread — magnified through an entire diet of from-scratch, homemade foods — sets our grocery budget at less than a quarter of what it was in her prior marriage. We don’t hire anyone to mow our lawn, and I take care of most of our plumbing and appliance repairs and all other homeowner maintenance myself.

Those details add up. Although the study itself reflects the explicit sexism involved in this topic, Salary.com recently conducted a study that disclosed what the median annual salary of a stay-at-home mother would be based on the “jobs that reflect a day in the life of a Mom, and using Salary.com’s Salary Wizard[.]” According to their analysis, the median annual salary for a person performing those functions is $162,581.

Were she a single parent earning that much more and farming out all of the services I perform, the response would be a mixture of accolades for what a successful “career woman” she was and probably more whispered judgments about her not showing up in her daughter’s life in the capacity nearly eighty percent of Americans say she should be focused on.

…and realities that outweigh the financial

All relationships are different and, even among households with one stay-at-home parent, those differences frame the costs and benefits in differing terms. In our case, which is wildly different from the situation when I was the sole breadwinner for well over a decade, the quality of life benefits are both the primary driving force in what my job is and what has allowed me to grow to the point of taking as much pride in how I do it as I ever did as a commercial lawyer.

We don’t head into the weekend needing to clean the house, take care of the yard, catch up on laundry, or anything else. Virtually every waking moment she’s home from work, we’re recreating. We’re both cyclists and love to hike, though sometimes we may just talk, play a game of cards or a board game with the kids or stream a movie we all want to see. If she wants to take a yoga class or meet up with friends, there are no impediments to her doing so and, more importantly, no guilt associated with it.

One final note — this isn’t for everyone

One harsh reality is that with decades of mounting income disparity, less families are in a position to have a stay-at-home parent than ever. The fundamental need to put a roof over their heads and food on the table often dictates that both adults in the household must work regardless of their desires or the benefits of having a dedicated parent/homemaker in the house.

Aside from that, not everyone is cut out to be a stay-at-home parent. There’s nothing wrong with that — not everyone cares enough about religion to be a pastor, most people don’t love cooking enough to go to culinary school, and plenty of people are too nervous about public speaking to be trial lawyers or broadcast journalists. In fact, my fiancé has repeatedly said she’d sink into depression if she had my job. Like any other occupation, staying at home is not for everyone.

I happen to like the minutiae of managing our household to the point I’ve watched YouTube videos on how to fold a fitted sheet into a square because it always bugged me to open the linen closet and see them look like piles. I’m happy helping the PTA organize a fundraiser and have enjoyed the years I’ve spent being the “room mom” and “art mom” in my kids’ classes, even if I have to overlook the fact that the art supply closet and each set of watercolors and pack of colored pencils it contains are conspicuously labeled “Art Mom.” My fiancé is so good at her job she’s largely responsible for training other professionals how to do theirs better, which is a meaningful and fulfilling thing for her that I support in both direct and indirect ways.

It took days of reflection for her coworker to rethink her assumption — so ingrained in our society she blurted in a moment without a thought — that the only reason she questioned my fiancé’s capacity to be the breadwinner in our family is the fact that she’s a woman. To her credit, after reflecting on it, she was willing to admit it was at least as condescending a judgment about my fiancé as a professional as it was toward me. Hopefully someday we can live in a world where the fit a person has with the job they choose allows contributing to and providing for their family in the way that’s best for them and the family instead of focusing so closely on societal expectations related to both men and women.

You may also like these posts on The Good Men Project:

The post Why Isn’t It “The Toughest Job in the World” When a Man Does It? appeared first on The Good Men Project.