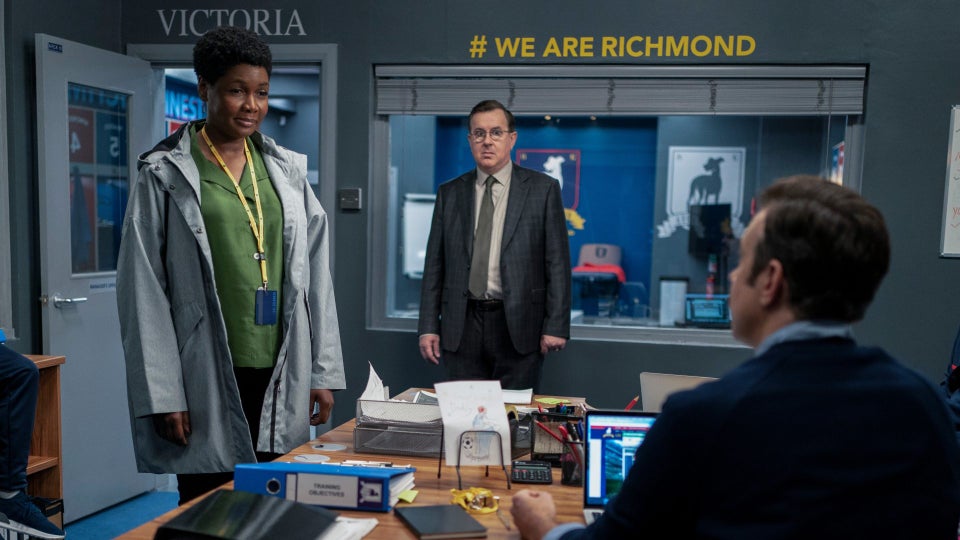 If there’s one show that broke out during our collective year of watching TV at home, Ted Lasso was it. How did the Apple TV+ series about an overly optimistic American coach who was set up to fail as an England premier league soccer coach win over audiences, critics and die-hard sports fans? The Today Show said it best: “it’s a comedy with heart at time when we need it most.” The second season is back and already its newest cast member has our attention: British stage and screen actress Sarah Niles.

Niles plays sports psychologist Dr. Sharon Fieldstone, who’s brought in after AFC Richmond’s star (and equally effusive) player Dani Rojas suffers a mental break after mistakenly killing the team’s greyhound mascot. While most of the team welcomes Fieldstone coming on board, Ted Lasso (Jason Sudeikis) is shockingly hesitant at welcoming her into the fold.

In real life, it was the complete opposite. Niles was approached by the producers to join the cast—adding some Black girl magic to the beloved series—but she hadn’t watched the show everyone had falling in love with. After a viewing a few episodes of season one, she was hooked. The actress, who’s had several appearances on British TV (I May Destroy You, Catastrophe) and stage (Three Sisters, Leave Talking), talks with ESSENCE about joining Ted Lasso, getting inspiration from LeBron James and anchoring her spirit in being curious, just like Ted.

ESSENCE: When you posted on Instagram that you’d be joining the cast of Ted Lasso, one of your followers said that “everything you touch turns to gold.” What do you attribute to your golden touch?

ESSENCE: On the show you play sports psychologist, Dr. Sharon Fieldstone. But by playing this character, do you find you now have more mental peace in your real life?

SARAH NILES: Yes. Mental strength, I think as well. I was listening to a lot of LeBron James when he talks about having the right mindset for the game. I would listen to that because if I was getting nervous, because there’s a lot going on with COVID and the anxieties around that: getting your tests [results], keeping two meters [a part], and wearing masks. There’s a lot of that busyness going on that you wouldn’t necessarily have on set beforehand. So I would listen to that before I got on set and I would get into that kind of zone. Sharon is a very calm character, she really observes a lot. I found I can carry that into my work—seeing beyond and having that mental strength and being open to take on whatever comes.

ESSENCE: On the series, there’s a lot of music and pop culture references that Ted Lasso really drops. Do you have a favorite or is there any reference that resonates with you most? One of my faves is when Ted’s talking to Roy Kent and he says, “I didn’t stop watching the Fresh Prince of Bel Air because they switched Aunt Vivs.” I was like, who wrote this? [laughs]

SARAH NILES: I have a lot of family in America and I think Jason and I are around the same age, so there are certain things we would have a little laugh and banter about because we understand. I know there’s little drops of Biz Markie, which I’m a big fan of.

ESSENCE: Since you mentioned that you have family in the U.S., is there something in American culture that just don’t get it—much like how Ted Lasso doesn’t understand the English’s love of tea, which he calls “pigeon sweat” on the series.

SARAH NILES: Oh my gosh, what’s those weird, those rolls that you have that’s like a marshmallow in the middle. I don’t get them.

ESSENCE: Many people say how much Ted Lasso resonated because it made us laugh, but also, like you said, “it was a kind, a good natured show.” Ted Lasso dropped so many gems too. Are there any quotes from the character that really spoke to you?

SARAH NILES: “Be curious, not judgmental” that’s just one that speaks to me. As you get older and you get a lot wiser, and sometimes you still hark back to that innocence, that openness. I think if you can still carry that through, into your life, it’ll serve you well, to be curious.

ESSENCE: Lately, Black British actors have really taken Hollywood by storm. When Black Brits actors first started coming out there was criticism, but I feel like there’s a shift now because everyone was so excited for Daniel Kaluuya winning the Oscar. Do you feel it’s a shift? And if so, what do you attribute to it?

SARAH NILES: I’m hoping there’s a shift because we must be wise and be careful that we’re not fighting over little crumbs around the table while other people are having the big feast. Too often we can get involved with complaining and it goes back to that strange idea of there’s not enough for all of us, and I’ve never believed that. I refuse to believe that there’s not enough for all of us. People are making so much wonderful moves, creating really amazing work. It’s really important for us to keep open to that. I’d love to see lots more Americans come over to England.