by admin June 17, 2020
I am embarrassed and ashamed to think that I was once a proud member of the Robert E. Lee Middle School Band in the San Angelo Independent School District (SAISD) and that we regularly played such songs as "The Night They Drove Ol' Dixie Down," "The Battle Hymn of the Republic," and "When Johnny Comes Marching Home Again" during half-time performances at football games while wearing blue and gray, military-style band uniforms donned with two rows of yellow-brass buttons that made us all look like we were members of the Confederate Army.

I hope that they retire that uniform, too, if they haven't already. They were horribly hot in the summer and early-fall, West Texas heat.  Of course, none of us kids had any choice in the matter.  Other than to cultivate a rote, unthinking sense of empty patriotic pride, I don't recall ever learning anything about Robert E. Lee.

When my American History teacher at that school didn't read the morning paper to us, the rest of the time was dedicated to showing us films, of which only a few were about American History.  Since his class was always after early-morning band practice, it became a time for me to catch up on my sleep in class once the lights went down.  Now I understand all of this today as systemic racism and how my classmates and I were miseducated, at least in this significant way, as a consequence.

Contrary to how Susie Smith might consider me writing this post based on her comments below, I am most definitely not an "outside agitator." Quite the contrary.  This is deeply personal to me.  I am a witness to the history and effects of Jim Crow racism that my family and community endured in San Angelo.

I was able to ultimately get a Ph.D. at Stanford University and secure a position at the University of Texas at Austin where I am a member of the faculty very much as a consequence of the Mexican American Civil Rights and Women's Movement that expanded opportunity for young people like me during that time period of the late 70s and early 80s.

I was born and raised in San Angelo and still have family, friends, and a church community there that I am confident would fully align with those mentioned below who are calling for a name change to Robert E. Lee Middle School.  I'm surprised that this hadn't come up sooner, particularly since we've been fighting the presence of Confederate statues on the UT Campus for close to a couple of decades.

Optimally, San Angelo needs to additionally offer Ethnic Studies—which is now state policy at the high school level—and teach the truth of segregation and its own racist past. I myself have a story to tell about how my grandfather, the Reverend Camilo Alfredo Rios, desegregated both the Concho River and the Municipal Swimming Pool.  He was also engaged in sit-ins and helped desegregate public establishments like restaurants and hotels downtown. There are many stories, many scars, and people who are still alive to tell them.

For example, children could learn about Ben Aguirre, whose story sheds a light on the systemic violence involving police and Anglo teenage boys who had the practice of hunting Mexican boys "for sport," together with a complicit judicial system.  Accordingly, all students could and should read this historical research by Dr. David Montejano (2005) on how twenty-year old Private Benigno Aguirre nearly lost his life at the hands of not only the police but also a hospital system that nearly left him for dead, as well.

I am in full agreement with Ashley Rodriguez, NAACP public relations chair at Angelo State University, who testified at last Monday's SAISD Board Meeting, that honoring Robert E. Lee equates to endorsing "the oppression that the Confederacy fought so hard to uphold," the same oppression that nearly took Ben Aguirre's life on that horrifically violent day on September 1, 1945 (see Montejano, 2005, pp. 41-66).

I respectfully disagree with Billie Munguia who says that this isn't the time to change the name.  I actually don't think that there could be a better time if San Angelo is to stay in step with the current social justice, #BlackLivesMatter, multi-ethnic and racial millennial movement that is currently under way.

As I and others have blogged and documented over the years, Ethnic Studies is a formidable movement in Texas and numerous other states.  California is poised at this very moment with Assembly Bill 1460 to make Ethnic Studies a requirement for graduation in the California State University system.
All told, it's such a breath of fresh air to read that local residents in San Angelo have mobilized against the school's name.  Please let me know if I may be of any help. 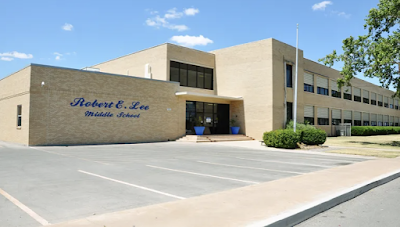