Neon Trees drummer Elaine Bradley on life during the coronavirus, the band’s new music and her latest venture — BYUtv 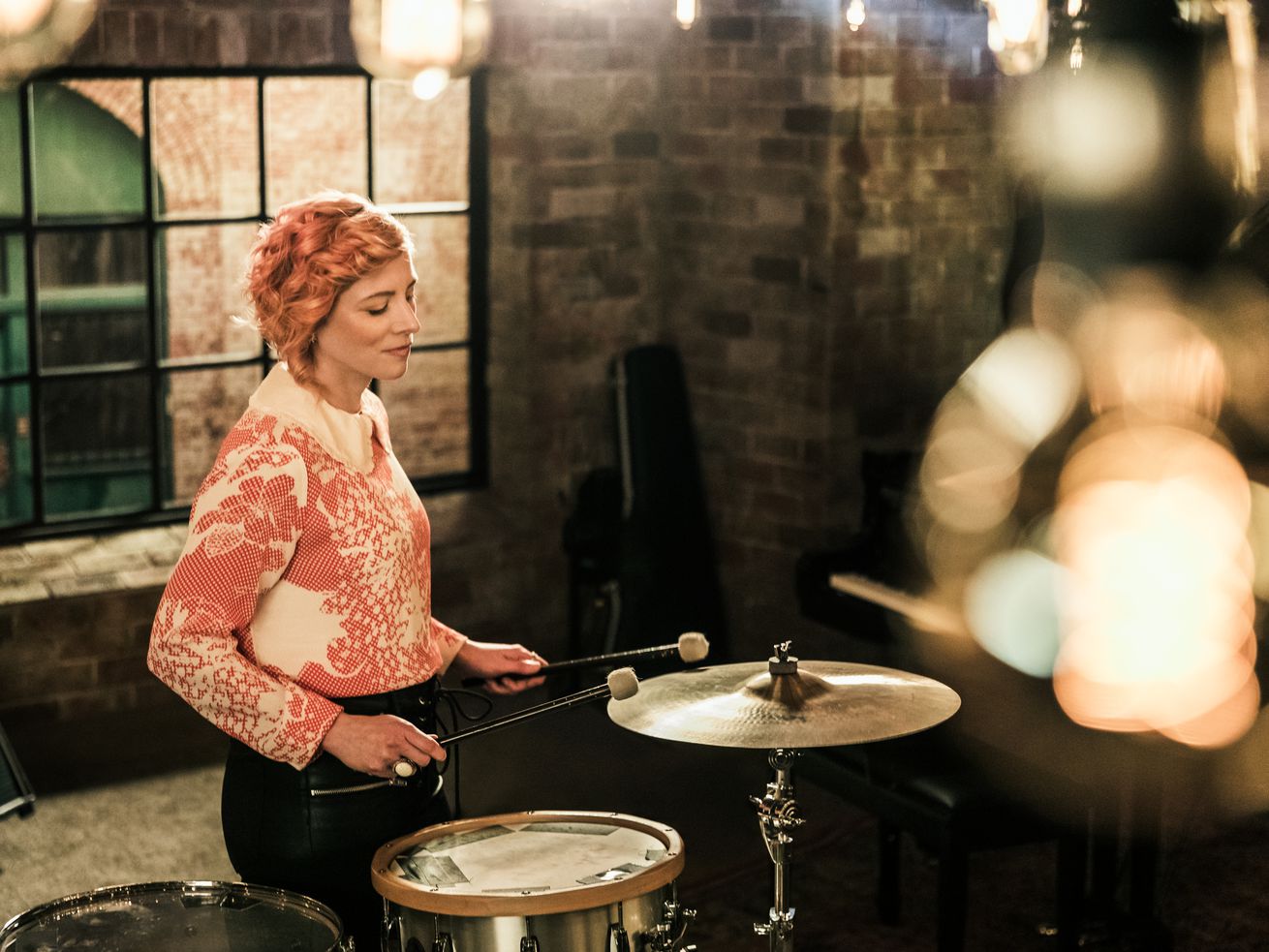 As the novel coronavirus pandemic continues, this is now the longest Elaine Bradley has been home in her nine years of marriage. And she’s loving every minute of it.

SALT LAKE CITY — At her home in central-western Germany, Elaine Bradley sits near a window and watches a cat walk down her empty street. She also catches a glimpse of castle ruins and tree-covered mountains that remind her of the Appalachians.

Bradley lives in a remote hiking town with a population slightly over 2,000. She’s about 30 minutes away from city noise — a normal chaos that has quieted over the past couple of months.

If life was normal right now, Bradley, the drummer for the band Neon Trees, would be prepping for upcoming shows. She’d be playing her drums and practicing the band’s new music.

From her 19th-century home, she FaceTimes with the Neon Trees once a week. She listens to the band’s music, but that’s about all she can do for practice because she doesn’t have a drum set in her house (she typically works on Neon Trees music when she’s in the States).

“I’m kind of isolated from any reality,” the drummer said with a laugh.

The absence of a drum set is intentional. Bradley likes to keep her home life separate from her professional life.

Due to the novel coronavirus pandemic, this is the most amount of time Bradley has spent at home in her nine years of marriage.

And she’s loving every minute of it.

She’s gone on long hikes with her husband and four kids. She’s helped her 7-year-old son with his schoolwork. Her 4-year-old daughter recently left training wheels behind. Bradley got a kick out of watching her child’s little legs pedal fast on a bike.

“I haven’t been able to fly to rehearsals and do our normal stuff, so it’s getting to the point where I kind of wish I had a drum set here just so I could keep working my chops a little bit,” Bradley said. “But at the same time, it is really nice to just be home with my family and not have to be like, ‘I’m going to go play my drums for three hours.’

Just a couple of months ago, though — before the pandemic kept her at home — Bradley was on-the-go. She was touring with Neon Trees and filming for the new BYUtv show “Grace Notes,” which premieres April 26.

Bradley recently caught up with the Deseret News about the new show, upcoming Neon Trees music and her idyllic family life in Germany.

Bradley really likes to talk. But she doesn’t like small talk. She’ll usually skip the weather and get right to the good stuff.

“I’m like, ‘What hurt you during your childhood, and how does that affect you now?”’ Bradley said with a laugh.

That’s why the drummer was so on board with the new BYUtv show “Grace Notes.” On the show, which Bradley filmed in January, the drummer interviews a number of musicians — Lindsey Stirling, Alex Boye, Jenny Oaks Baker, the National Parks, Paul Cardall and Ashley Hess, to name a few. They talk about the personal stories behind their faith and their music and how, many times, the two are inseparable.

“I love God and Jesus, and I love music,” Bradley said. “It was directly right up my alley.”

The 35-year-old drummer, who is a member of The Church of Jesus Christ of Latter-day Saints, has written songs about her faith since she was in high school. But it’s not music that’s available for streaming or on a Neon Trees album. It’s more of a hobby. She still writes the music on an acoustic guitar in her spare time — something she’s had a lot more of lately.

For Bradley, that music is a journal of sorts, a mirror that reflects how her faith has ebbed and flowed over time.

“It’s interesting to go back to songs from my earlier years where I wasn’t so secure in a faith. I always knew there was a God, but (there were) years where I didn’t really care what that meant,” she said. “It’s interesting to look at those lyrics, because I feel like I was always more self-aware in song. ... Later (I’m) going, ‘Why didn’t you listen to yourself? Couldn’t you see that you weren’t happy?’”

On “Grace Notes,” Bradley dives into this type of reflection with fellow musicians. Although she knew of the artists the show features, she didn’t know them on a personal level. By the end of filming, though, she felt connected to them all.

“Even if you rub elbows with somebody in the scene, it’s not the same as sitting down and talking about God and your faith and music and what inspires you,” Bradley said. “It was really fun to get to know people on that level just right away.”

And for Bradley, “Grace Notes” was a reminder of just how powerful music can be, and the ability it has to unite people, no matter their faith or background.

“I hope that there are other seasons to do,” she said.

One night, while filming “Grace Notes,” Bradley had to leave the set in Provo to fly to a Neon Trees show. She was back on set 48 hours later.

Neon Trees had a resurgence last fall, releasing the lead single from its first album in more than five years. But now, the busyness that has often characterized Bradley’s life as a rock star is gone.

Several of Neon Trees’ summer concert dates have been canceled or postponed. Although shows in July remain scheduled, Bradley doesn’t really know when the band will rehearse again.

Some major announcements are forthcoming, though.

“We’ve got a lot of new music up our sleeves, just getting ready to fire it out into the world,” she said.

But it could be awhile before she gets to play those songs live.

“It’s a huge waiting game,” the drummer said. “The entertainment industry, we’re all on the edge of our seats just kind of waiting for any sense of normalcy so that we can start planning. … I think we’re all eager to figure out when we can go back to work.”

But as Bradley waits “for the world to get back to normal,” she said she’s beyond content to embrace this unprecedented amount of time at home with her kids and her husband, Sebastian — a former paramedic/firefighter who is the regular stay-at-home parent.

Bradley has lived in Germany since June 2017. Her husband grew up there, and Bradley served a church mission in Frankfurt, so the transition was a fairly smooth one for her family.

All of her kids have dual citizenship, and in their home, German and English get spoken interchangeably — and sometimes simultaneously.

“Our poor youngest children that weren’t speaking when we moved here, they are the most confused and stunted by this whole thing,” Bradley said with a laugh. “It’s like a mouthful of marbles all the time.”

“But it’s nice that they’re going to grow up understanding that the differences between cultures isn’t a difference between right and wrong,” she added.

The other day, Bradley got her four kids to go on a three-hour hike into the mountains that surround their home. She watched her kids gradually go from complaining about leaving the house to acting as if there was nowhere else in the world they’d rather be. They had a picnic deep in the mountainside.

They’ve also been going into town a couple of times a week to order takeout — usually Turkish pizzas and fries. It’s been fun for Bradley to see her kids, who are close in age, get along and enjoy each other’s company.

As of now, Bradley thinks her family will move back to the U.S. in a few years. But for a moment, as the novel coronavirus has brought the world to a standstill, being tucked away in a remote mountainside is looking better and better.

“We’re living our best lives over here,” Bradley said. “We’ll see when we feel like moving back.”