Movie Reviews: Ready Or Not

by admin May 30, 2020
Ready Or Not
directed by Matt Bettinelli-Olpin and Tyler Gillett 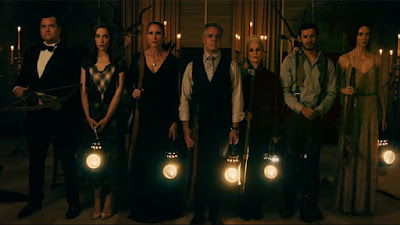 This horror/dark comedy movie has a lot in common with a movie previously reviewed here, You're Next. Both films invoke some pretty common horror motifs before simultaneously upending them or playing them for some twisted laughs. If you're not a horror film fan then this movie is simply not something that you should be watching.

If you are among that group of people who enjoy watching such movies then this low budget but high quality film is definitely something that should be on your to watch list. As with You're Next, Ready or Not imagines that a young woman, Grace (Samara Weaving) of modest means has gone to her fiancee's old family home, actually a mansion.

Yes I know there are some people who would never ever do such a thing. Grace and Alex Le Domas (Mark O'Brien) are to be married. They are in love you see. And Grace not only comes from modest means, she grew up in foster homes. Grace is eager to become the latest official Mrs. Le Domas and do the do.

Grace also wants to get acquainted with all of Alex's oft eccentric relatives, many of whom don't exactly appear too welcoming to their formerly impoverished new in-law. But you don't grow up in foster homes without learning to quickly adapt to new situations and turn the other cheek to snarky comments or pointed snubs. The wedding completes without a hitch. Grace is heads over heels in love with Alex and can't wait to show him how much in a suitably private suite.

But as the suddenly pensive Alex explains to his not so blushing bride, before they can truly consummate their marriage on their high thread count wool sheets, they must play a game. And no it's not the kind of game that might reasonably be on the minds of a young healthy just married couple. You see Alex's family originally made its money in board games and casinos before branching out to own sports franchises and several related income streams.

So games of all kinds are very important to all of them, both the blood relatives and those who have married into the family. It's so important in fact that as Alex ruefully tells Grace, you aren't truly considered a part of the family until you're played the random game selected on your wedding night. Grace could decline to play but that would be considered a very bad thing. It would reflect quite poorly on Alex. Well when you marry into a family, and I think this might even be more the case with women, who traditionally take their husband's name and are counted as part of his family, you go along to get along. Grace agrees to play the game.
Alex's bombastic father Tony (Henry Czerny), his still attractive mother Becky (Andie MacDowell), his drunk conflicted brother Daniel (Adam Brody), his cokehead sister Emilie (Melanie Scrofano), and his incompetent in-laws all appear happy to hear that Grace will play the game. Alex's severe Aunt Helene (Nicky Guadagni) isn't happy. She just radiates contempt for Grace.

As the family patriarch Tony explains in an obviously edited story that Grace finds highly unbelievable, there are reasons that go back to the family's initial accrual of wealth that detail why the family plays a game every time an outsider marries into the family.
In any event, Grace must draw a random card from an old box. The card will list which game everyone will play for the night. Grace draws hide and seek.  She misses Helene's brief fierce joy and Alex's disappointment. But a game is just a game right. Wanting to fit in Grace agrees to play and leaves the room, still attired in her wedding dress and heels, to find a suitable place to hide. Grace soon discovers that this particular game is actually quite serious.
This movie could be understood as a satire of how the rich prey on the non-rich. It also has something to say about the costs and benefits of marriage, obviously. There's quite a bit of comedy in the form of running gags and even a bit of slapstick.

The film references how things that are decidedly abnormal or even perverse can be normal to someone if everyone in their circle of family or friends accepts or promotes those behaviors. This is a bloody movie. There's not much in the way of sexual references outside of MacDowell in a few low cut dresses/gowns.

Whereas the heroine in You're Next had the somewhat implausible explanation of having grown up with a military veteran survivalist father, Grace is more realistic in that she's more interested in trying to survive and escape than anything else.
Still, when cornered Grace displays more abilities than anyone, even she, realized she had. The filmmakers know how to ratchet up the tension and just when to let it go with humor that is oft inappropriate. Although this film was low budget, it provides an excellent example of how good ideas, good writing and quality camera work can make a movie shine regardless of dollars invested.
Back to Feed
Use left/right arrows to navigate the slideshow or swipe left/right if using a mobile device