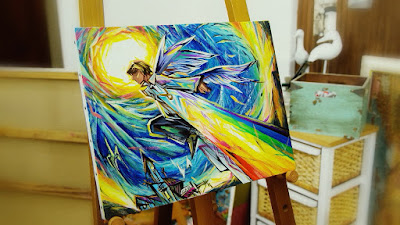 Once upon a time you could have considered GARO to be an obscure tokusatsu series, at least when compared to some of the bigger name franchises. But after 15 years, multiple television series and movies, three anime spin-offs simulcast worldwide and several official English-subtitled US Blu-Ray releases it's fair to say that ship has long since sailed. The fact this particular film even had English subtitles for its Japanese home video release just reinforces the fact. Celebrating 15 years of the Golden Knight, GARO: Gekkou No Tabibito ("Moonbow Traveler") brings back Raiga Saejima and the cast of The Makai Flower for their long-overdue movie outing - bringing together the various threads of the Saejima family storyline for potentially the last time.

As Raiga continues his duties as the current Golden Knight, he often thinks back on his father’s disappearance and the promise he made to one day return. Meanwhile Mayuri no longer has the ability to seal Horrors, but strives to find value in something the same way Kaoru did in her art.
When Mayuri is hypnotised by a sinister masked man and boards the Black Train, Raiga stows on board to rescue her. Aided by a mysterious boy, Raiga journeys through the carriages and is forced to face his own inner turmoil. However all is not as it seems. A plot is afoot to destroy the legacy of Garo, and it’ll take three generations of the Saejima family to stop one of their deadliest enemies.

It seems hard to believe it's been six whole years since Raiga's story first began in The Makai Flower, but when you remember that there was roughly the same amount of time between the original GARO series and Makai Senki (albeit with a few specials/movies thrown in during that time) it's clear that the Saejima story has always been one told over a long period of time. And as arguably the backbone of the entire franchise, that's perfectly understandable. There have been other wielders across numerous timelines and mediums since, but Kouga Saejima was the one that started it all - and it's his return fans have anxiously waited for since 2014. There may have been a taste of it during the Makai Tales anthology, but it wasn't the closure we all hoped was coming.

Despite all that time away though Moonbow Traveler doesn't waste any time in getting down to business. In fact part of the film's success owes to its simplicity. GARO's karmic struggle between good and evil has never been especially difficult to follow, and it's out of such a simple base concept that the franchise has been able to thrive and do some clever things. But Moonbow Traveler isn't a complex story with multiple twists and turns, but it is one that runs heavy on the emotion. GARO's penchant for violence and nudity has earned it a reputation as some sort of "adult" tokusatsu, but its themes and core values are all the same. Moonbow Traveler reminds you that the golden armour you've been watching is powered by love, and that one of the biggest themes in the whole of the franchise is the importance of family.

Moonbow Traveler starts out much like any other GARO story does - with a generic Horror attack to quickly get the audience to grips with the characters again. It's a quick sequence but it does the job nicely, filling the necessary quota for sexualised imagery and providing a quick and flashy CGI fight sequence. It's basically an episode climax at the beginning of the film, and that's no bad thing. With that sowing the seeds for the story to come it's then time to properly get a glimpse at how the characters have moved on since The Makai Flower. Raiga puts on a brave face but is still tortured by his parents' disappearance, while Mayuri tries to find solace in gardening to overcome the loss of her special abilities. Both Masei Nakayama (Raiga) and Natsumi Ishibashi (Mayuri) show a real subtlety to their emotions during these scenes, and the ambiguity of their relationship mirrors that of Kouga and Kaoru in the first two series. It's clear that the pair have moved beyond just being friends, but the story doesn't feel any special need to pay attention to that because their interactions are all that's needed to convey it.

From here the movie shifts into its main storyline, which at first might seem like a fairly uninspiring damsel in distress plot but cleverly turns that on its head later as the film progresses. Taking place aboard a magical train filled with strange rooms and even stranger passengers, this provides the perfect opportunity for Moonbow Traveler to really flex its stranger side. Again GARO has a reputation for the dark and macabre, but if Lament of the Dark Dragon proved anything it's that Keita Amemiya's imagination is also whimsical and incredibly colourful. With their bigger budgets the movies have often been used to flex these more fairytale-like aspects, and Raiga's journey through the black train certainly celebrates these qualities. A vivid fantasy of bizarre passengers, BSDM clad prison guards and enchanted Shogi games, Amemiya delivers a barrage of colourful imagery that shows off just how much colour GARO has to offer.

The third act takes the movie in a different direction again, not just signposting the climax but also embracing its role as a celebration of the Saejima dynasty. Both Ryosei Konishi and Hiroyuki Watanabe reprise their roles as Kouga and Taiga Saejima - bringing the three generations of Golden Knight together for the first time. This is the culmination of all the callbacks Moonbow Traveler makes to previous parts in the story, from Raiga and Mayuri's appreciation of Kaoru's artwork to the appearance of the mysterious Makai entity Gajari. Raiga's actions begin to mirror that of Kouga's, and the reveal of the Dark Knight Kiba as the mastermind behind everything ties it all together. When  it's a matter of family, who better than the knight-turned-Horror that originally killed Taiga? It could easily be construed as fan service, but nothing in Moonbow Traveler is gratuitous. It's all well-timed, doesn't outstay its welcome and above all always makes sense to the story.

But though the appearance of Kouga and Taiga may be the film's biggest selling point, Moonbow Traveler never stops being Raiga's film. His actions and bond with Mayuri remain the focal point, and    his reunion with his father is less about end-capping Kouga's story and more setting Raiga on the next chapter in his journey. The destination may be a celebration of the Saejima family, but it's very firmly just that and not simply GARO's greatest hits. There's no Rei, no Jabi and Rekka or Bikku is simply a name check. Crow is the only other Flower cast member that appears, and even his role is largely one of support. It might sound disappointing to some, but too many cooks could have easily spoiled the broth. The focus on fewer characters makes for a much tighter story, and one where no one feels wasted.

With three generations of Garo lined up side by side, one might think the obvious tactic for a show-stopping finale would be to have all three transform together. Another would be have the three somehow merge into some giant super Garo, given the franchise's love for big CGI super forms. Yet Moonbow Traveler makes the shocking decision to do neither, and rather than it seem like a wasted opportunity does something that somehow manages to be even better. As much as we all love those ornate shiny suits, the truth is they just don't lend themselves well to lengthy action scenes. The franchise's masterwork has always been in its unsuited swordplay and fight choreography, and the emphasis on those has always made those moments the suits appear all the more special. Three Garos on screen at once would have been quite the spectacle, but the impact and emotion of seeing son, father and grandfather fight side together untransformed whilst sharing the same armour carry so much more weight. There's still ample amounts of fast-paced CGI armour action to give the scenes some flash, but they don't quite emphasise GARO's core values in the same way.

Much like how Fang of God felt like the culmination of Ryuga's journey as the Golden Knight, GARO: Moonbow Traveler feels like the end of an era - only this time it isn't just for Raiga, but for the whole Saejima family. Although the film's main hook will always be giving fans the family reunion they'd long been waiting for, Moonbow Traveler is careful in moderating its fan service and still provides a story that's uniquely Ryuga's. It's action-packed and visually stunning in the way GARO always is, but unlike other movie entries this one pulls it off effortlessly - letting the emotional impact of the film instead be the true spectacle. There's no guarantee this truly is the end of the Saejima story (and the film definitely leaves room for more to be told), but deep down it does seem like one last hurrah. And if this is how it ends, I'm more than satisfied.