‘It will be one heck of a nice building’: Rice-Eccles Stadium renovations remain on track 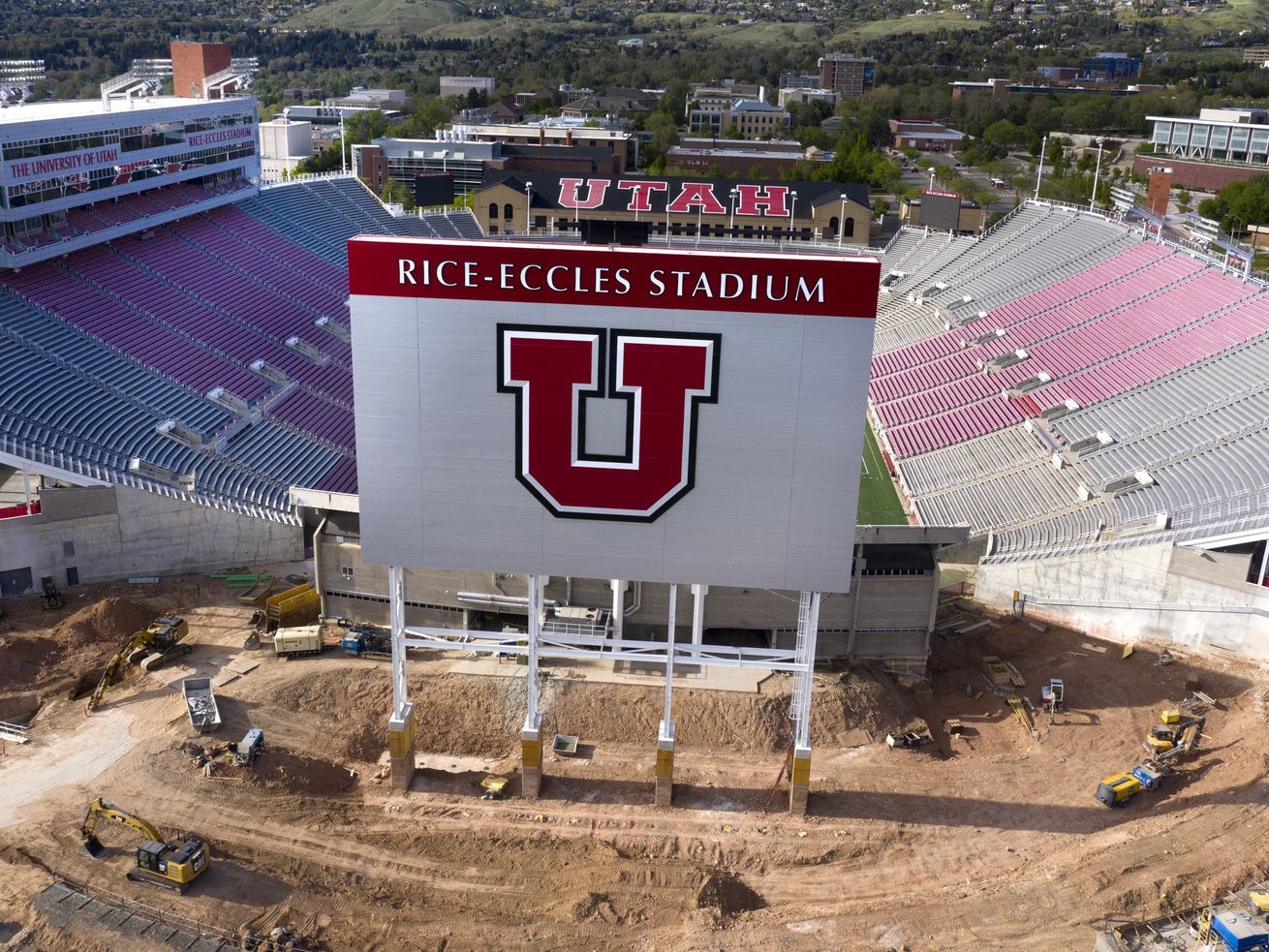 Construction continues on the south end of Rice-Eccles Stadium in Salt Lake City on Tuesday, May 5, 2020. | Steve Griffin, Deseret News

Project is progressing despite the coronavirus pandemic.

SALT LAKE CITY — While other sports venues at the University of Utah sit dormant during the coronavirus pandemic, Rice-Eccles Stadium has been a hub of activity. Construction on the south end expansion, which includes the addition of premium seating and the Ken Garff Performance Zone, is well underway.

Ground has been cleared, including removal of the 2002 Winter Olympics cauldron for refurbishment and then relocation, as the $80 million project moves toward a targeted completion date before the 2021 football season.

Billed as enhancements that will “transform the home of Utah football and provide a world-class student-athlete experience,” the changes to Rice-Eccles Stadium are highly anticipated. Capacity at the on-campus facility will grow from 45,807 seats to 51,444, complete with additional revenue streams.

Brennan, who was involved with initial planning of the project five years ago, admits he drives by the stadium often. He said it’s almost like having his own time-lapse camera of things.

“It’s nice to see something physically happening because everything else has been so virtual,” Brennan said. “So it’s been cool for our recruits to see, for our employees to see, for our players, our coaches, it’s a symbol that Utah football and Utah athletics is moving forward — that better times are still coming and we’re not going to stop.”

Layton Construction has managed to keep the project progressing through the ongoing pandemic. Josh Haines, vice president of the company, reports crews have managed to stay on schedule. Social distancing is practiced with vigilance. So, too, is the wearing of masks.

The work, though, is progressing at a measured pace. That’s just the way it is because of a 26-foot deep excavation needed to get the new radius of the stadium bowl down to field level. Crews can only drill down five feet at a time in constructing a shoring wall, more or less a huge bench, requiring 12 inches of shotcrete (sprayed concrete) along the way.

As of last week, the third of six lifts was in progress. Haines noted that not much can be done with footings and such until the bench is 100% complete. That should be done in the next 4-5 weeks. The Ken Garff Performance Zone will rest upon it.

“It’s all on schedule and it will be one heck of a nice building,” Haines said. “It’ll be a great addition for the University of Utah’s sports, It’ll be quite nice.”

The shoring wall, he added, will also be impressive when complete.

Adding to the degree of difficulty is working around the large video scoreboard that remains in place. Removal of concrete below it required careful work around footings.

Another project in the works is a new home for the Olympic cauldron. Once refurbished it’ll rest on what Haines said will be an “impressive structure” 130-feet high just outside the southwest corner of the stadium. It’ll be visible from inside the facility. A plaza and a water feature is being constructed around the cauldron’s new base.

Inside the stadium, Haines said steel portions of the structure should be in place by the end of October. Foundation and utility work are also part of the plan as the first phase is completed by November. No seats will be lost this football season and construction will not conflict with any games or special events.

Phase 2 of the project will involve demolition of the Clark Center and building of the Ken Garff Performance Zone, which features premium seating plus new hospitality areas, locker rooms, sports medicine and training facilities. Equipment, media and recruiting areas are also planned.

Haines estimates that as many as 1,000 people — including on-site workers, office personnel and suppliers — will ultimately work on the project. As many as eight or nine different companies are slated to be involved.

There are approximately 100 workers currently on site and Layton Construction has rolled out a protocol to keep everyone safe from the coronavirus. Haines acknowledged it’s been “super, super tough” in some ways — starting with ensuring that everyone is 6 feet apart and wearing masks all the time.

“We all want to keep working. We all want to keep making money and supporting our families. The only way that is going to work is if we keep 6 feet apart and we can all wear masks.” — Josh Haines, vice president of Layton Construction

All employees are required to answer five questions each day, stimulating conversation about any possibility of being around someone with the virus or in possible contact with it through travel. The goal, Haines noted, is to get people to open up. Immediate quarantines will be imposed if necessary. The company has even gone so far as keeping portable toilets 6 feet apart and used by separate subcontractors so situations can be isolated if needed.

Brennan considers it amazing that they’ve been able to work through the COVID-19 crisis as the state moves into an improved orange (moderate) phase of concern.

“It’s been awesome,” Brennan said. “I was worried we were going to lose a bunch of time on this project.”

Things, though, are progressing. Brennan considers it a real credit Layton Construction.

“I don’t want to make light of anything anyone is going through but I think a lot of people are hungry for normalcy,” he said. “Football, I think, and sports is one of those things that brings that to people. It’s an escape. It’s a way to forget a little bit and focus on something else. It really brings people together.”

The Rice-Eccles Stadium project, he continued, is part of that.

“It’s not something we’re just building. Everyone has a piece of this and is contributing to it,” Brennan said. “So it’s cool for everyone to have a piece of ownership of it and see something physical going up.”

It’s been a popular project. Sales have been brisk. Scott Kull, deputy athletics director for external operations, said that 10 of 14 suites were sold before the pandemic, as were all 40 loge boxes. The sales all happened in a span of three weeks shortly after the 2019 season ended and ground was broken.

The process started with the suites. Kull said donors with a lifetime giving of $1 million or more were approached first. The pool consisted of 22 individuals, corporations or foundations. Those purchasing suites are required to make a $250,000 capital gift donation and agree to a 10-year commitment of $50,000 with an annual 3% escalator.

Prior to the pandemic, Utah officials established a preview center inside what used to be the Olympics gallery and theatre adjacent to the stadium. Kull said prospective buyers could come in, sit in a loge box or ledge seat to scale and see what the actual sight lines would be on the screen. It proved to be a huge benefit for people to meet face-to-face about purchases.

The pandemic, however, shut that down.

“We were concerned that we wouldn’t haven that same personal touch,” Kull noted. “It’s probably slowed down a little, but people are still taking meetings from us.”

“It’s going great, especially since all this hit,” he added. “We’ve done a lot better than I thought we would under the circumstances.”

Kull, who expressed gratitude that the fan base has hung in there and been receptive to seeing the different premium products, said there’s 3,000 people on a waiting list for season tickets and another 2,000 that have signed up for a Ken Garff Performance Zone insiders list. He’s holding out hope that the virtual theatre may reopen in early June.

“It’s going to be awesome,” Kull said of the new options that include club and rooftop seating.

In a time when a lot of people are nervous about the business of collegiate athletics, Utah is moving forward. That’s not to say, however, that officials don’t know that potential problems in the industry could be big in terms of finances and other matters.

“We need to tackle them,” Brennan said. “But at the same time we’re optimistic and ready to go.”

Brennan is appreciative that people in the state are very good at being prudent and smart in regards to being fiscally responsible and good stewards.

Utah, he explained, has been patient — dotting all the i’s and crossing the t’s. Studies have been done and fans have been involved — a key component.

“I’m really proud of how we’ve done this project in taking our time and not rushing through it, putting ourselves in a bad position,” Brennan said.

Effective planning includes placement of the mammoth video board on the south end of the stadium. It was set with the current project in mind years ago.

Things, obviously, are working out.

“It’s really cool to be at a place for a while and see it transition into different things,” Brennan said in crediting the creativity of folks like design partners Populous and VCBO Architecture, in addition to Layton Construction.

Brennan is especially pleased the stadium facelift won’t handicap the athletic department in the future. Funding will come from expected revenue and private donations. The Garff family contributed $17.5 million to the project.

The whole thing, Brennan explained, has been galvanizing in bringing everyone together.

“You’re never to your goal even if you win a national championship,” Brennan said. “You can always get better. It’s just part of that process of getting better.”