Is football ‘a safe haven’? These players and coaches are making their case to play 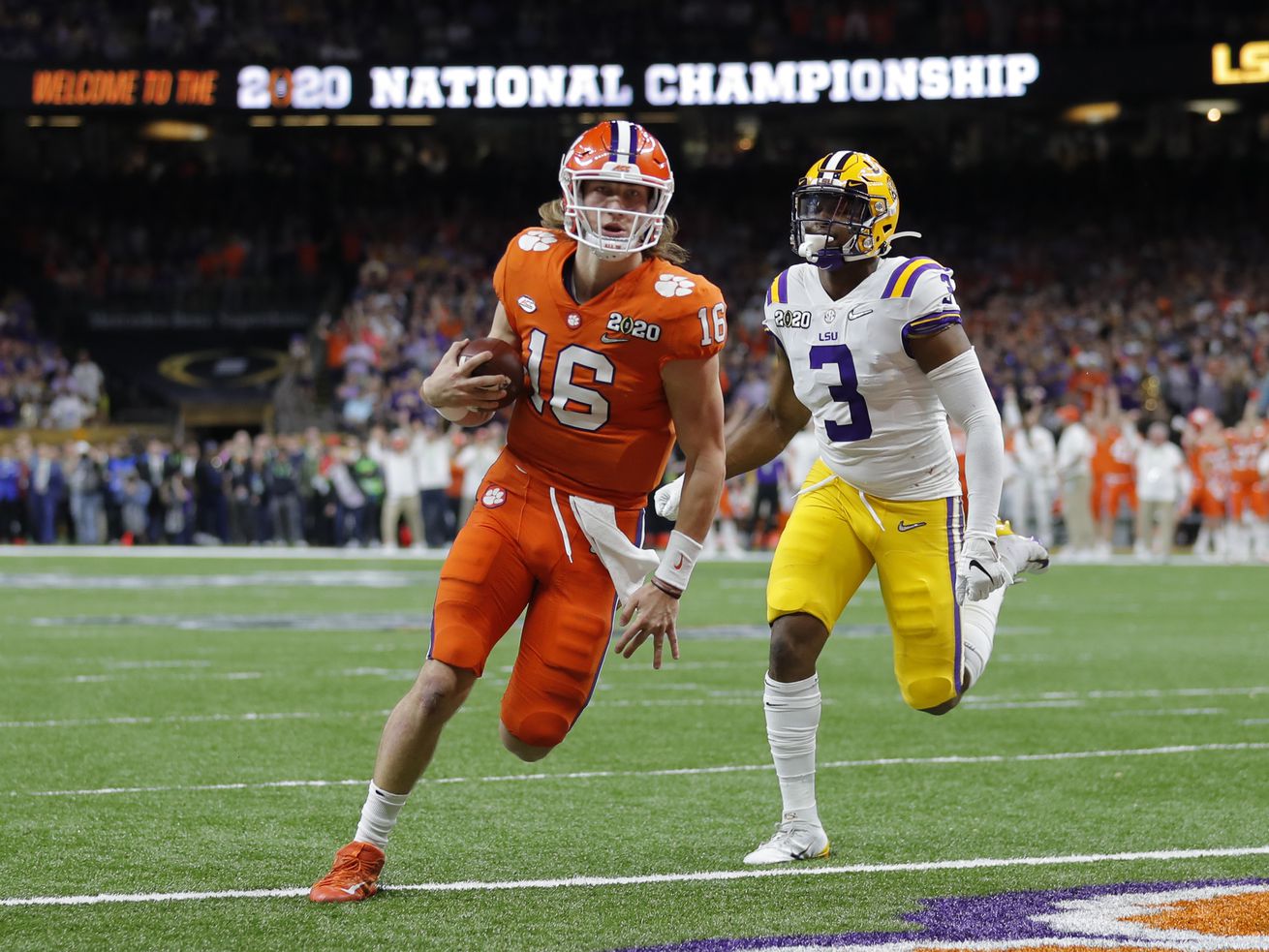 With the fate of the college football season hanging precariously in the balance, one of the top players in the country helped spearhead a campaign to salvage it.

Clemson quarterback Trevor Lawrence, who is one of the Heisman Trophy frontrunners and is projected to be the No. 1 pick in the 2021 NFL Draft, sent a tweet Sunday night as part of a #WeWantToPlay movement along with other college football players from around the country.

On Tuesday, the Big Ten and Pac-12 both announced that their seasons will be postponed.

In recent weeks, the players — you know, those that actually take the field and put themselves in harm’s way to play the game and put their health and livelihoods and futures on the line — have expressed their feelings and perspectives about the sport they love.

Lawrence took his opportunity Sunday to share his views as reports surfaced that the Big Ten would be canceling or postponing the season (which it did Tuesday), while acknowledging the dangers of COVID-19. And he made a compelling case.

“People are at just as much, if not more risk, if we don’t play. Players will all be sent home to their own communities where social distancing is highly unlikely and medical care and expenses will be placed on the families if they were to contract COVID-19,” Lawrence wrote. “Not to mention the players coming from situations that are not good for them/ their future and having to go back to that. Football is a safe haven for so many people.

“We are more likely to get the virus in everyday life than playing football. Having a season also incentivizes players being safe and taking all of the right precautions to try to avoid contracting COVID because the season/ teammates’ safety is on the line. Without the season, as we’ve seen already, people will not social distance or wear masks and take the proper precautions.”

Not all players agree with Lawrence’s position. But many do.

No doubt, athletes are using their voices to speak up on issues that impact them. Following the lead of Pac-12 players, Big Ten players created an organization called “College Athlete Unity,” which started at Michigan and became part of the Pac-12’s #WeAreUnited movement in early August. The group threatened to boycott the season if demands about health protocols and scholarship guarantees were not granted. The Big Ten group didn’t go as far as the Pac-12 players, who demanded revenue for playing.

But it’s clear that the players are not the ones that make the big decisions — such as whether or not to hold a college football season during a pandemic.

In response to Lawrence’s tweet, Trevor Matich, the starting center on BYU’s national championship team and an award-winning analyst for ESPN, wrote on social media, “This goes to a point I’ve been making for a while: Among all the conflicting interests, who should have the power to choose whether to play? I say, the players. Why is it controversial to respect the choice of players/parents? There are risks in playing, and in not playing.”

This goes to a point I've been making for a while: Among all the conflicting interests, who should have the power to choose whether to play? I say, the players. Why is it controversial to respect the choice of players/parents? There are risks in playing, and in not playing. https://t.co/nC9hLMQbjV

On Monday, other prominent figures jumped on board the #WeWantToPlay train. Among them included Big Ten coaches — Michigan’s Jim Harbaugh, Ohio State’s Ryan Day and Penn State’s James Franklin, who have been keeping close tabs on their players, and their health, for months amid the pandemic.

“I would like to address the rumors that are swirling today. I’m not advocating for football this fall because of my passion or our players’ desire to play but because of the facts accumulated over the last eight weeks since our players returned to campus on June 13,” he said.

“We have developed a great prototype for how we can make this work and provide the opportunity for players to play. If you are transparent and follow the rules, this is how it can be done. I am forever proud of our players, parents, coaches and staff for being leaders and role models in our sport, at our institution and in society. We will continue to follow all health and safety guidelines, teach, train and coach those young men and their families that have put their trust in us, while advocating for a football season in the fall.”

At the end of his statement, Harbaugh included the hashtag #WeWantToCoach alongside #WeWantToPlay.

Day told reporters “we should certainly not cancel the season.”

“I’m passionate about this because our guys want to play. I’m proud of who they are and the decisions they’ve made. I think it’s our responsibility to make sure they respect this virus. I’m not a doctor and I don’t understand a lot of these things. The medical experts that we’re leaning on are the ones that are guiding our decisions.” — Nebraska coach Scott Frost

On Tuesday, Washington Post columnist Sally Jenkins questioned Harbaugh’s argument, writing that “it’s important to recognize one thing. Those summer workouts took place in a very small and controlled bubble — and that bubble is about to burst in a very big way.”

Nebraska coach Scott Frost, however, contends that players are safer in a football environment rather than outside of it.

“If we send kids home, they’re going to be in closer contact with a lot of family members and other people that might be at higher risk for coronavirus than if we keep them here in an environment, where they’re around other healthy, young people. If I had a son, I would want him playing football,” Frost said. “I think this is the safest place he could be, and a lot of schools around the conference probably feel the same way, that the safest environment we can put these guys in is an environment where they’re being monitored constantly, being screened, being tested, being taken care of (and) being protected if they do get sick.

“I’m passionate about this because our guys want to play. I’m proud of who they are and the decisions they’ve made,” Frost continued. “I think it’s our responsibility to make sure they respect this virus. I’m not a doctor and I don’t understand a lot of these things. The medical experts that we’re leaning on are the ones that are guiding our decisions.”

Meanwhile, Clemson’s Dabo Swinney and Alabama’s Nick Saban also expressed their opinions. (The ACC and SEC have yet to announce a decision on the fall season.)

“Life is about tradeoffs. There are no guarantees that college football will be completely safe — that’s absolutely true; it’s always true. But the structure and discipline of football programs is very likely safer than what the lived experience of 18-to-22-year-olds will be if there isn’t a season.” — Sen. Ben Sasse, R-Neb.

Saban told ESPN: “I want to play, but I want to play for the players’ sake, the value they can create for themselves. I know I’ll be criticized no matter what I say, that I don’t care about player safety. Look, players are a lot safer with us than they are running around at home.”

However, Jenkins writes that “the people who insist on playing this fall are simply putting up straw men.

“Who says they would all be sent home? Why wouldn’t they be with their peers, simply going to fall semester classes and continuing to condition? Or is mere classwork not worth the risk of exposure? Is that what he just said?”

In Washington, D.C., Sen. Ben Sasse, R-Neb. sent a letter to Big Ten presidents, asking them to stage the 2020 season.

“Life is about tradeoffs. There are no guarantees that college football will be completely safe — that’s absolutely true; it’s always true. But the structure and discipline of football programs is very likely safer than what the lived experience of 18-to-22-year-olds will be if there isn’t a season,” Sasse wrote. “Canceling the fall season would mean closing down socially distanced, structured programs for these athletes. Young men will be pushed away from universities that are uniquely positioned to provide them with testing and health care.”