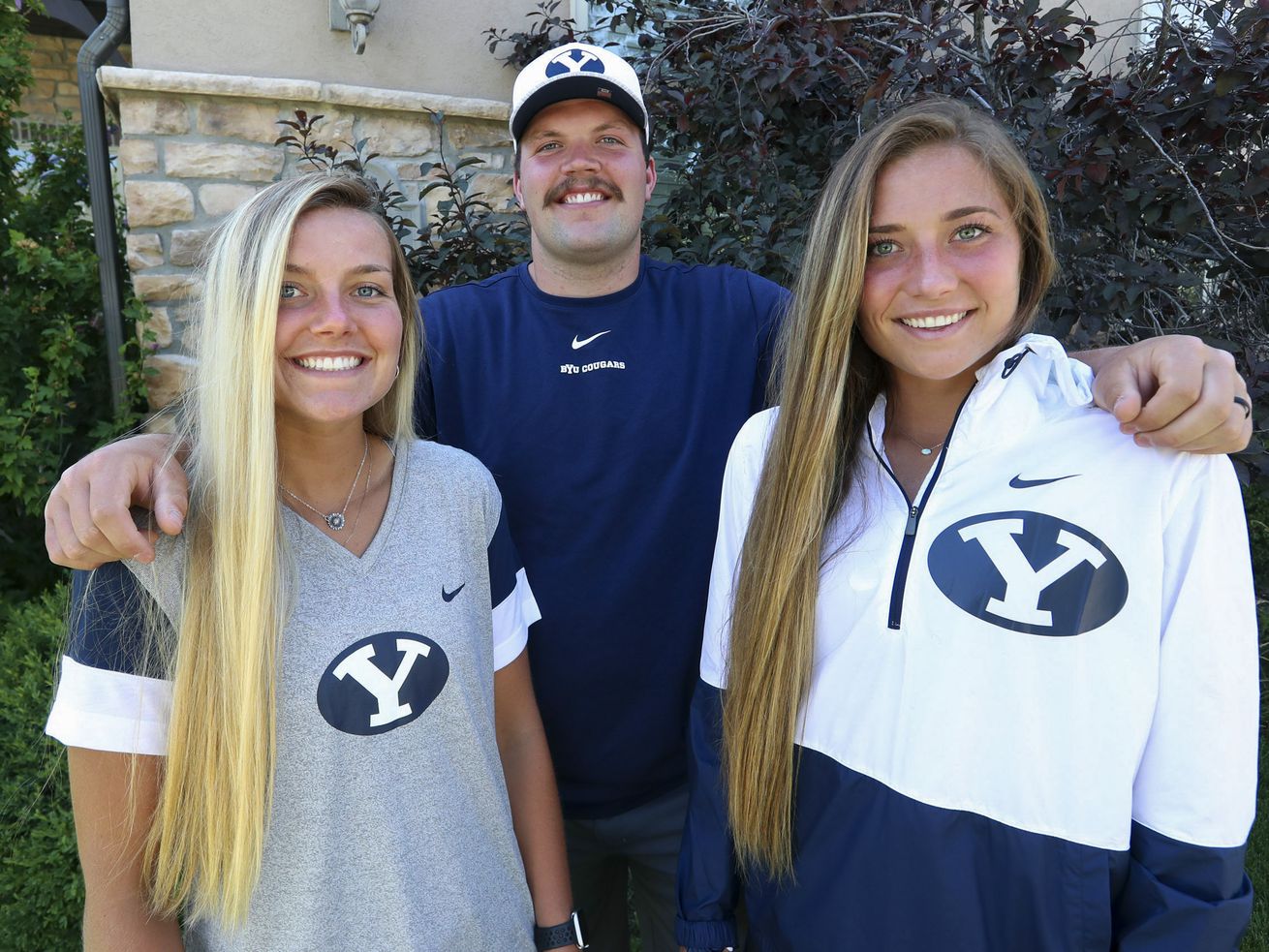 Siblings Savanna, James and Haven Empey pose for a photo outside their home in Lehi on Tuesday, July 7, 2020. All three are BYU athletes. James plays football and Savanna and Haven play soccer. | Steve Griffin, Deseret News

James Empey is a three-year starter on the Cougars’ football team, while his younger sisters are ready to start their careers as goalkeepers on BYU’s nationally prominent women’s soccer team

PROVO — A little more than five years ago, James Empey was a standout two-way lineman on American Fork High’s football team who had just committed to play for the University of Utah, Savanna Empey was starting to receive recruiting attention as a sophomore goalkeeper and Haven Empey was a spunky 13-year-old already telling people she could step seamlessly into her sister’s role in a couple of years at AFHS.

What if somebody had told them that in 2020 they would all be suiting up for the BYU Cougars?

“I would have said they were crazy,” said Haven Empey, the Deseret News’ Ms. Soccer in 2019 and recent winner of the Gatorade Utah Girls Soccer Player of the Year award.

But here the Empey siblings are, playing for the school that their father, former BYU lineman and assistant coach Mike Empey played and worked for, after nobody saw this coming in 2015.

“When the stars aligned and everything worked out and everybody wanted to be here (at BYU), it was really exciting. Everybody has been happy, and it has been a whole lot of fun.” — BYU offensive lineman James Empey

James Empey, 23, is a preseason All-America candidate entering his junior year as a three-year starting center on BYU’s offensive line.

Savanna Empey, 21, is back from a mission for The Church of Jesus Christ of Latter-day Saints to Hamilton, New Zealand, and will be a redshirt freshman goalkeeper on BYU’s nationally prominent women’s soccer team.

Haven Empey, 18, graduated from AFHS last December, enrolled at BYU in January and is preparing to compete with her sister for goalkeeper minutes this fall.

“I always thought it would be cool to play somewhere that they would be. But I didn’t know that we would ever be at the same school, especially BYU,” said James Empey, who served a church mission in Lisbon, Portugal, decommitted from Utah when Mike Empey joined Kalani Sitake’s staff in 2016, and has emerged as one of the best players on BYU’s team.

“When the stars aligned and everything worked out and everybody wanted to be here, it was really exciting,” James Empey said. “Everybody has been happy, and it has been a whole lot of fun.”

Before the coronavirus pandemic hit in March, the siblings made it a point to get together on campus a couple times a week, usually at Legends Grill in the Student Athlete Building to share a meal, or study together on the third floor.

“It is a blast,” said Savanna Empey, who had a couple classes with James Empey before her mission in 2017 and a few with Haven Empey during the recently completed winter semester. “It is fun to still be a family even though James is married and in a different stage of life.”

Said Haven Empey: “Sav and I this past semester had three classes together, which was super awesome; We both took American Heritage and I don’t think we would have survived it if we hadn’t taken it together.”

After the pandemic hit, the sisters moved from off-campus housing (Savanna) and the dormitories (Haven) to their parents’ home in Lehi. Mike Empey left coaching at BYU after the 2017 season, a season that James redshirted.

“I honestly don’t think this is what we pictured growing up,” Haven Empey said. “During our childhood, we didn’t even think this is how it would line up. We all had offers to a bunch of other schools, but it just kinda felt right for me to go to BYU. It was the place for me. I am sure my siblings would say the same thing.”

Savanna claims to be the first sibling to get the Empey ship pointed toward BYU — after their father, of course. She committed while James Empey was on his mission and still planning to play for Utah.

“Growing up, I didn’t plan on going to BYU,” she said. “But after my first couple of offers came in I checked out BYU and realized it was the right fit and had the right feeling for me. We have an incredible coaching staff and an incredible soccer program, and the education is awesome.”

All three student-athletes credited their parents for paving the way to their athletic and academic success.

“Mom (Stephanie) and dad are the all-stars in all this,” James Empey said.

In addition to football and soccer, the siblings all played basketball until they reached high school and began focusing on one sport. Their oldest sister, McKenzie, played goalkeeper for BYU-Hawaii, as did her husband, before that school dropped its intercollegiate sports program.

Saturdays in the Empey household were “crazy,” James Empey said, as were most weeknights.

“There was lots of scrambling to see who could drive who where,” he said. “But once the scrambling subsided, we actually had it nailed down to a ‘T’ regarding who would get driven to which places at which times, and who had a game and who had a practice.”

Said Savanna Empey: “My mom is a champ at scheduling and organizing and making sure we were all where we were supposed to be. So, major props to her.”

When the Empeys weren’t dominating organized leagues and high school sports, they were competing “like mad” against each other, Haven Empey said. Whether it was in the front yard kicking around a soccer ball, at a nearby park or over card and board games, things got intense.

“If I could describe my family in one word, it would be ‘competitive.’ It was super fun,” she said. “Everything we did, we just made it a fun game that nobody wanted to lose.”

Added Savanna: “In our family we can get really competitive about anything. We will have a chocolate chip cookie bakeoff. That’s a normal thing around here. We will take the competition to the kitchen, to the card table, you name it.”

All three BYU student-athletes also chose the word ‘supportive’ to describe their family. Last fall, in the middle of his sophomore season on BYU’s 7-6 football team, James Empey would allude in interviews to Haven Empey’s 2019 state championship run.

“The support we have for each other is pretty awesome,” Haven Empey said, joking that she’s better at football than James is at soccer. “We all try to make it to every football game that we can. If they are away, we will gather at home and watch James on TV. For soccer as well, he will try to come to any soccer game that he can. We are just a super supportive family.”

That’s the part of the deal that everyone saw coming.