Celebrate the Summer of Switch 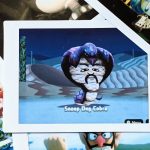 This week’s reveal of the upcoming Nintendo Switch (OLED model) was a delightful surprise, but, with an October release date, it’ll be well into autumn before most consumers can get their hands on it. In the meantime, we’re in the thick of summer and, new Switch model aside, Nintendo of America has got more than enough to keep us occupied throughout the sweatiest of seasons.

Last month, I received an amazing summer party pack full of books, board games, crazy costumes, and lots and lots of ideas for how to make each week of summer vacation a veritable celebration of all things Nintendo. It started on Friday, June 4th with the release of DC Super Hero Girls: Teen Power, a game that, despite my being far outside the target audience, I continue to enjoy.

While it took the better part of a month for me to make my way through the game’s main story mode—in my defense, I was also juggling playthroughs of several other great new titles at the time—I was continually impressed with how fun and approachable Teen Power was, even for fans who know its principal cast from appearances outside the DC Super Hero Girls universe. Playing (and replaying) story and side missions to earn rewards to recruit, level up, and properly accessorize my army of teenage superheroines and villains always felt gratifying, and the game’s assist system, which kicks in after you’ve failed a mission multiple times, will definitely prevent younger players from getting overly frustrated during its tenser battles.

The following weekend, June 11th, marked the arrival of Game Builder Garage, and my family combined our release date festivities with the next day’s suggestion on our Nintendo activity calendar, a picnic complete with snacks, downloadable crafts from the Play Nintendo family portal, and, in our case, a little outdoor gaming as my kids made their way through Game Builder Garage‘s earliest projects. And though the game is intuitive enough, knowing that I’d already put in my time with Alice and Bob gave them an easy resource when things went sideways.

The week after that my son and I explored the June 17th activity, a New Pokémon Snap creative photo challenge, and, miraculously, were even able to print up some of our favorites on the special Switch-edition Fujifilm Instax Mini Link Smartphone Printer (that showed up just in time from Amazon). Not to be outdone, Sunday the 20th saw my daughter and I revisited one of her favorite titles, Miitopia, dressed as mage and chef characters respectively. She and I even printed up some of our favorites screenshots from that game as well—like the great and powerful Snoop Dog Cobra!

We wound down June with a family board game night and pizza party featuring Super Mario Monopoly—though, if that’s not your preferred Monopoly flavor, rest assured that an Animal Crossing version is on the way—and some bonus Speed Golf to mark the arrival of Mario Golf: Super Rush on the 25th. I have to admit, though, we did pass on the suggested activity for June 28th, a family Super Smash Bros. Ultimate tournament, instead electing to crown my 16-year-old son the pre-emptive winner as he has already bested everyone else in the house in Smash time and time again.

No sooner had we started making plans for Independence Day weekend than a new July calendar made its way into my inbox from our friends at Nintendo. Should you and your family wish to play along, you can download your very own copy and blissfully make your way through three more weeks of Nintendo Switch-related summer fun.

Of special note this month is the release of the highly-anticipated The Legend of Zelda: Skyward Sword HD on July 16th and July 25th’s Animal Crossing: New Horizons family blanket fort activity—forts being a perennial favorite in my household.

However you choose to spend quality time with your family this summer, we at GeekDad hope you have a safe, secure, and fun time with the ones who matter most. And, if you’re looking for polls, puzzles, printables, and more remember that Play Nintendo is always there to provide free, family-friendly content to gamers of all ages.

Super Mario Monopoly, Random House books, DoorDash and Target gift cards, Animal Crossing Aquabeads, t-shirts from Fifth Sun, and picnic supplies were all provided as part of the promotional Nintendo Summer Activity Mailer. This post contains affiliate links. DC Super Hero Girls: Teen Power is awesome, and you should play it regardless of your age or preferred comic continuity.

Click through to read all of "Celebrate the Summer of Switch" at GeekDad.If you value content from GeekDad, please support us via Patreon or use this link to shop at Amazon. Thanks!